The term “dovetail rail” or “dovetail mount” can refer to different types of sliding rail systems that are found on firearms primarily for mounting telescopic sights. These are commonly used on rimfire rifles and airguns. The name dovetail originally comes from the triangular shape of the joint that resembles the shape of the fanned-out tail of a dove.

Dovetails are one of the oldest systems historically and are commonly used in the woodworking system, often joining corners in furniture. The same technology is used while making the dovetail railing system in firearms so that it ensures security and correct alignment of the sights.

Because there are no official standardized version of dovetails you need to be careful while installing the rails and measuring the sights in order to ensure that you’re using the proper size and thus, having the best experience while attaching and removing mounted optics. Additionally, you can check our review on Choke for Buckshot.

Types and Sizes of Dovetail Rails and Sights

Again, there are many types of dovetail sights, four of them being the most common types. Usually the purpose of the 1911 in question regulates the type of dovetail the manufacturer installs.

The original 1911 cut dovetail is called GI, or Government dovetail. These are the simplest when it comes to designs. However, they have some limitations in terms of sight features. If you have a standard GI dovetail and want to install any adjustable sight then you would have to use a significantly higher front sight, which can prompt issues regarding snagging and holstering.

Another common dovetail is the Novak LoMount. It is mainly used in the fields of law enforcement due to its snag-free low profile.

Bo-mar and LPA/TRT are the other two types of common dovetails that are mainly used in competitions and target shooting purposes due to their fine tuning adjustability. Besides, you can choose some Holster for 1911 Commander.

Will any sight fit?

If you are wondering whether you can use any type of sight for your existing dovetail, the answer is no. You cannot use just any type of sight on your dovetail without making any modifications. For a direct sight replacement the type of dovetail that is currently on the slide needs to be determined first, which will indicate the type of rear sight that needs to be purchased. For example, a Novak style dovetail will not take on GI, Bo-mar or LPA style sights, the reason being all of them having differences in their dimensions that will hamper the fitting process.

However, you can change the style of sight on a slide by taking some things into consideration. For example, the GI dovetail can modified to take on Novak, Bo-mar or LPA style sights. Having said that, this modification process is both time consuming and costly and needs to be supervised by the experts.

In order to install the right size of sights to your dovetail you need to measure out the dimension of the dovetail slots very carefully.

Generally there are four types of measurements that determine the dimension of a dovetail slot. These are the opening and end widths, angle of the dovetail shoulder and the depth of the cut.

The width and the shoulder angle are two sensitive specifications when it comes to dovetail measurements. While measuring the width of a dovetail slot you need to measure along the long axis of the barrel at the bottom of the slot, the widest front and back point of the dovetail. If the slot is tapered with the muzzle pointing forward, the right opening is slightly wider than the left end. The shoulders are angled inward and the slot is cut to a specific depth.

The depth of the cut is determined by a gunsmith or a machinist. If we take a 3/8” dovetail slot with a 60 degree angle, which is the most common dovetail available, it means that this slot is 3/8 inch (0.375 inch) wide at base and the inside of the shoulders are angled at 60 degrees with the base.

How to Measure Dovetail Sights

If you are cutting dovetails and installing sights on a daily basis for a living, the best solution for you might be to order a dovetail measuring tool kit. Many manufacturers make both universal and model-specific dovetail installation tools. These help you to measure and install the sights properly and quickly without damaging your gun. However, these tools are relatively costly.

Using a cast can be very handy to measure out the angle of the shoulders. 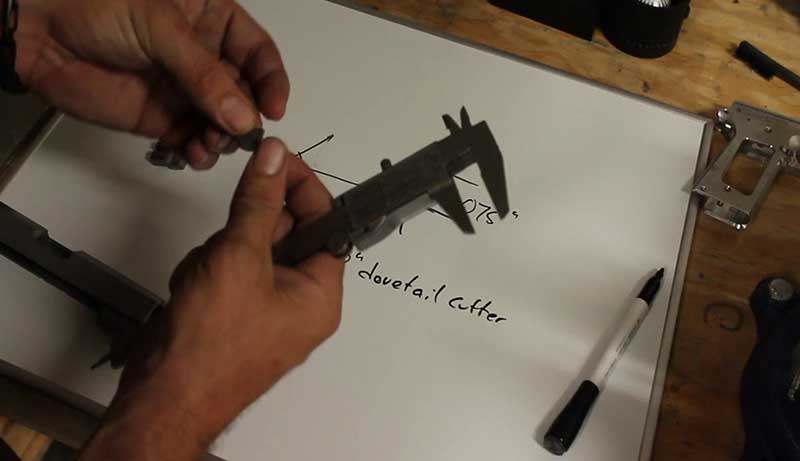 Dovetails are one of the most commonly used railing systems in airguns. In order to make sure the sight attachments in the gun are being used to their fullest potential the slots need to be measured and cut properly to fit in the sights using the methods discussed above.